Ross is a pig, the main protagonist in the game. He is the main element for a vehicle, as a vehicle is not able to start without Ross in the 'construction area' and it is impossible to finish a level without Ross touching the finish line. This means that broken pieces of the vehicle (without Ross in them) will not finish the level. He is one of King Pig's most favoured pigs, as he constructs vehicles in the name of King Pig to help his community catch bird eggs.

Although most call him Freckles, or simply 'Pig', his real name is Ross.

Ross is the main character/protagonist of Bad Piggies. He is able to build and drive vehicles to get to a certain point of Piggy Island. He is sometimes in the company of King Pig and Mechanic Pig. Ross can propel wheels, umbrellas, suction cup wheels (etc.) as well as turn a motor or mechanical function on and off.

Ross looks similar to the other Minion Pigs, but with freckles. (with an explorer hat if used in The Road to El Porkado episode). There are many skins for Ross, including a gentleman to an alien pig with tentacles. Some 3 star skins make him sound higher or lower pitched, robotic, or even have no noise at all. 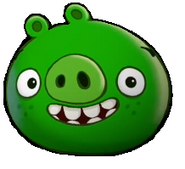 Pigs in a plane 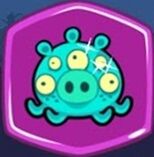