Snooze is the sixteenth episode of Piggy Tales.

When a piggy starts snoring, what would a fellow pig do to make him stop?

Two pigs were sleeping in the dark, but the snoring pig was just snoring too loud that the other pig awoke. Trying to wake up the snoring pig, the awaken pig shook him, and used an alarm clock, then a frying pan, an air horn, loud speakers, a train, and a pile of TNT. As the attempts didn't work, he shook the pig with anger. The attempts, however, tired him, making him fall asleep despite the snore. The snoring pig stopped snoring, but the other pig started snoring. The once-snoring pig was awaken by the sound, the started to wake him up, creating another loop. 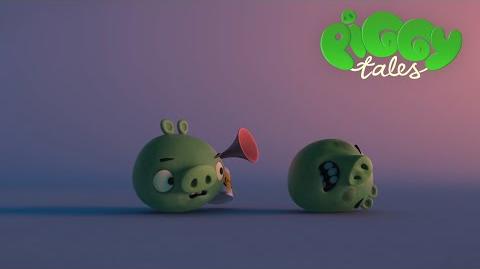