The Hole is the fifth episode of Piggy Tales.

Where’s that breeze coming from? When two piggies come across a mysterious hole in the ground, they throw caution to the wind...

A Minion Pig is playing with the wind that came from the hole. Another piggy passed by and sees his friend playing in the wind. Curiously, he approached him and was wondering what his friend is doing, but he decided to join him. One of the piggies faced at the wind then, so the other imitated him then played with it normally again. One of the piggies decided to run and jump over the hole, making him float. The other piggy look at the floating piggy, and joined him as well. They have fun floating there, until they didn't realize that the wind that came from the hole stopped, making both piggies fall into the hole. After they reached the bottom, They just played around inside the hole. Suddenly, the hole shook, making the piggies panick and got launched off the hole. After they come out from the hole, the piggies got scared and ran away while the hole started creating wind again. 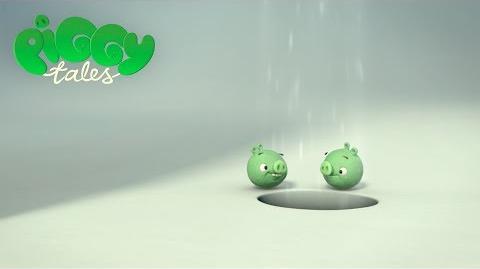 Retrieved from "https://badpiggies.fandom.com/wiki/The_Hole?oldid=12014"
Community content is available under CC-BY-SA unless otherwise noted.